To share your memory on the wall of Eugene Jones, sign in using one of the following options:

Print
On Monday, February 08, 2021, Eugene Loyd Jones, loving husband, father, and grandfather, passed away at the age of 97.
‘Gene’ was born Oct 12, 1923, in Twin Falls, Idaho to Nathaniel and Nona Jones. After High School, at the age of 19, he... Read More
On Monday, February 08, 2021, Eugene Loyd Jones, loving husband, father, and grandfather, passed away at the age of 97.
‘Gene’ was born Oct 12, 1923, in Twin Falls, Idaho to Nathaniel and Nona Jones. After High School, at the age of 19, he married Ruby Marie Miller on Sept 1, 1942. Together they had four children (Toni Rae, Donnelly Ann, Gary Eugene, and Larry Wayne). Driven by a strong sense of duty to his country, he enlisted in the Army and landed in Texas for pilot training where he was drafted to fly C47 Cargo planes in the Pacific Theater of World War II. He served honorably and was the recipient of many awards including the distinguished Air Medal, awarded “for single acts of heroism or meritorious achievement while participating in aerial flight.” In his case, this included flying more than 1,000 miles over shark-infested waters. Gene also claimed the distinction as the first American pilot to fly into Japanese airspace after the war ended. Upon return, he went home to meet his baby, a 9-month old daughter, for the first time.
He and Ruby then moved their young family to California where Gene was stationed. With another little girl born and a third child on the way, Gene decided to leave the military and begin his own career in the dry cleaning business. After a tragic car accident that took his wife from him (1965) he married Joann Davis in 1967, adding another son to the family (Gary Roy).
Ever the hard worker, Gene would often labor six days a week, but frequently enjoyed family time on the weekends at their cabin in Glen Ellen, California. His love for flying never died. Rather, he passed on the thrill of it to his grandchildren by taking them to the skies in his private Cessna, which he also frequently flew to visit family and check in on his war buddies.
After Gene retired in 1980, he and Joann moved back to Twin Falls and bought Curry Trailer Park, which they managed for 10 years making it a landmark destination for travelers to the area from all over the world. They eventually sold the park and remodeled a triplex in historic downtown Twin Falls where Gene would spend his remaining fruitful years fishing on the Snake River (his playground as a young boy), being the neighborhood fix-it man, and slowing down enough to enjoy a cold Diet Pepsi on the back porch. “Grandpa made life magical’ as one granddaughter put it. And whether it was giving one of his knowing winks, playing a game of pool, going on a plane ride, fishing at Dierkes Lake, or just being present for a porch sit, he made life magical indeed.
He and his sweetheart, Joann enjoyed many years taking their RV to spend the winters in Yuma, Arizona and embrace the “snowbird” life. It was in Arizona where he’d often see his daughters and their children who lived nearby.
Gene was always aware of the needs of others, especially the children who grew up calling him Grandpa, and whose young lives he so richly blessed. Loyal to his family and his country, his service to others was a part of who he was as a person, and it was always offered in a way that never seemed to be an imposition to himself.
Gene had a quiet way about him with a hallmark twinkle in his eye. His was a life that spoke more loudly in action than his words ever did, revealing a man whose joy and immense contentedness came from an unrushed life in service to others, fixing up his RV, hitting the road for a desert adventure, and spending time with his loved ones. Everything he owned he kept in mint condition in a house full of antiques that all looked brand new.
Hard work. Loving-kindness. Joy in family. Service toward others. And a stalwart commitment to honor, dignity, integrity, and duty. Gene was known to say “I vacuum every Thursday whether it needs it or not,” which, in a way, reflects his life’s philosophy. Gene was a quiet giant of a man who did his duty, loved his family, served his community, and always vacuumed on Thursdays.
He is preceded in death by his father Nathanial and mother Nona, his first wife Ruby, his sisters Doris and Shirley, his brother Glenn, and one great-granddaughter Grace. He is survived by his wife, Joann, his five children, Toni Rae, Donnelly Ann, Gary Eugene, Gary Roy, and Larry Wayne, 14 grandchildren, 50 great-grandchildren, and 10 great-great-grandchildren.
Live Stream Link

To send flowers to the family or plant a tree in memory of Eugene Loyd Jones, please visit our Heartfelt Sympathies Store.

Receive notifications about information and event scheduling for Eugene

We encourage you to share your most beloved memories of Eugene here, so that the family and other loved ones can always see it. You can upload cherished photographs, or share your favorite stories, and can even comment on those shared by others.

Kevin and Rachel Barry sent flowers to the family of Eugene Loyd Jones.
Show you care by sending flowers

Posted Feb 14, 2021 at 05:49pm
Donnie and family, wishing you peace to bring comfort, courage to face the days ahead, and loving memories to forever hold in your hearts.

Posted Feb 14, 2021 at 05:29pm
Donnie and family, we are deeply sorry for your loss. You are in our prayers and have our heartfelt condolences.

Flowers were purchased for the family of Eugene Jones. Send Flowers 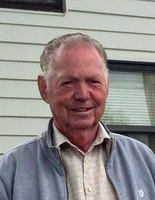