To share your memory on the wall of Barbara Hutchins, sign in using one of the following options:

Barbara was born on July 20, 1938 in Twin Falls. She grew up in Hazelton,Idaho where she met her husband, Don H... Read More
Barbara Hutchins, 82, of Twin Falls, Idaho (formerly of Hazelton, Idaho) passed away peacefully at home on February 12, 2021.

Barbara was born on July 20, 1938 in Twin Falls. She grew up in Hazelton,Idaho where she met her husband, Don Hutchins.
Don and Barbara were married on December 19, 1956. They farmed in the greenwood area for many years. Then moved to the Hunt area and farmed for many more years.
Barbara was a housewife,always loved to cook and play cards with friends.Barbara was an animal lover(dogs} They raised two children Brent Hutchins, Shana Hutchins-Buie. Shana had an identical twin, Shari, who died at birth. Barbara and Don moved to Filer to retire where Don later passed away. After Don's passing, Barbara moved in with Shana and family. Shana took care of her for years until her passing.
She was preceded in death by her parents Earl & Lillian Hall,husband Don, daughter Shari, son Brent and many other family members.
Barbara is survived by her daughter Shana (Don) Buie of Twin Falls, two grandsons,Cody & Kyler Buie,of Twin falls granddaughter Jessica of Kimberly, great granddaughter Kilha Rae, great grandson Shawn Norris, and Jim Ingle of Sandy, Utah. sister Ele Neilsen of Twin falls
Shana would like to thank Tenley, Amanda at St. Luke's home health.Shana would also like to thank Damein at St Luke's hospice for all the support in her last days. Barbara's last wish was to be cremated. She will have a celebration of life with her son Brent at a later date.
Fly high mom
Read Less

Receive notifications about information and event scheduling for Barbara

There are no events scheduled. You can still show your support by sending flowers directly to the family, or planting a memorial tree in memory of Barbara Ann Hutchins.
Plant a Tree

We encourage you to share your most beloved memories of Barbara here, so that the family and other loved ones can always see it. You can upload cherished photographs, or share your favorite stories, and can even comment on those shared by others. 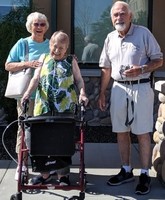