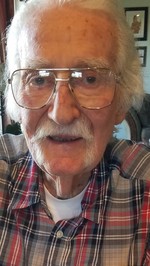 Ronald Leroy Gaskill, 86, from Jerome, Idaho, passed away peacefully in his home on the 20th of September, surrounded by family members.
Ron attended Twin Falls High School, where he met and married his sweetheart of 65 years, Shirley Mingo. Together they had three children, traveled from coast to coast and eventually returned to Idaho, to what Ron referred to as 'God’s country.’
Ron was a career Navy man, proudly serving his country from 1949-1976. He achieved the rank of Senior Chief Petty Officer Anti- Submarine Warfare. He loved sharing stories of his Naval Aviation career and had fond memories of flying around the globe, feeling honored to be a veteran of the Korean, Vietnam, and Cold Wars. Following his retirement, he returned to college to become an educator, teaching the building trades to High School students in Lewiston, Maine.
His hobbies varied from motorcycles, camping and hunting to western movies and fine woodworking. He was a lifetime member of the NRA and participated extensively in competitive shooting and achieved an Expert standing in marksmanship with the Navy Rifle and Pistol team. He will always have a place in the hearts of his friends and family.
Ron was preceded in death by his parents, Roy Gaskill and Hildred (Gaskill) Hansen, Twin Falls, his sister Shirley (Gaskill) Snyder, Washington, his wife, Shirley Gaskill, Jerome. He is survived by his Children, Don Gaskill (Francine), Cincinnati, Ohio, Debbie (Brian) Conrad, Jerome and Doug (Charmaine) Gaskill, Twin Falls, six grandchildren, Michelle (Gaskill) Robey, 1st Class Petty Officer (USN) Dan Gaskill, Brianna and Braedon Conrad, Caitlyn and Chance Gaskill, two great-grandchildren Cailyn and Harper Robey.
Services for Ron will be held at White-Reynolds Funeral Chapel, 2466 Addison E on Monday, September 28th. Friends and family are invited to a viewing from 1 to 2 pm, with a short service at 2 followed by a graveside service at Rock Creek Veterans Cemetery, 5 miles south of Hansen. You may leave your condolences for the family at whitereynoldschapel.com
Due to the ongoing Covid pandemic, the family asks that those in attendance please wear a mask and observe social distancing and avoid hugs and handshakes. Thank you.