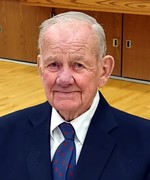 Richard "Dick" Alan Farnsworth passed away in his home in Twin Falls Idaho Saturday the 2nd of April at about 2:45 p.m. surrounded by loved ones. Richard was 90 years old.

Richard was born in the small rural town of Burlington Colorado. After graduating from High School, he entered the Army and was deployed to Japan during the Korean war. After leaving the Army he worked for short time as service station attendant where he met what would become his future wife Wanda and the two were married in July of 1956 and were together until Wanda’s death in January of 2003. He worked for short time on the Roberts Tunnel as the train operator. After the tunnel was completed, he and Wanda moved Back to Denver where he worked at Conoco service station on 14th Lydon eventually becoming part owner. At that time, He moved to Aurora Colorado where He and Wanda had their only child Kerry. In 1994 he a Wanda moved to Twin falls Idaho where he retired to pursue his loves of gardening, bowling, and fishing. In 2003 Wanda passed away with cancer and at that time he rededicated is life to Jesus joining Twin Falls Reformed Christion Church. On Saturday the Lord saw fit to take Richard to be with Him in paradise.

A funeral service will be held at 1:00 p.m., Tuesday, April 12, 2022 at Twin Falls Reformed Church 1631 Grandview Dr. in Twin Falls with a viewing 1 hour prior starting at 12:00 p.m. Burial will follow at Sunset Memorial Park in Twin Falls. Condolences may be left by visiting www.whitereynoldschapel.com.

In lieu of flowers please contribute to Home Delivered Meals at the Twin Falls Senior Center.