To share your memory on the wall of Mary \"Martie\" Taylor Israel, sign in using one of the following options:

Print
Mary Taylor Israel passed away on August 13, 2020, at her home in Twin Falls. She was born March 22, 1941, at Lampe, Missouri, the fifth of eleven children of Henry R. and Martha DeArmond Taylor.

She grew up on the family farm and atten... Read More
Mary Taylor Israel passed away on August 13, 2020, at her home in Twin Falls. She was born March 22, 1941, at Lampe, Missouri, the fifth of eleven children of Henry R. and Martha DeArmond Taylor.

She grew up on the family farm and attended school thru the sixth grade in Blue Eye, Missouri. The family moved to Buhl, Idaho, in 1954, where she graduated from Buhl High School in 1959. She then attended St. Mary’s School of Nursing in Kansas City, Missouri, receiving her Registered Nurse degree in 1962, and went to work at the hospital in Poplar Bluff, Missouri. Through her brother Ray she met Chris Israel in 1963. After many letters and visits they were married May 30, 1964, in Poplar Bluff. They lived in Tuscaloosa, Alabama, until 1967 when they moved to Eden, Idaho. She worked at St. Benedicts in Jerome for about five years. Son, Jim arrived in 1969 and became the apple in Mom’s eyes. After transfers with Chris’ work they ended up in Twin Falls in 1978. She worked in the hospital of the Twin Falls Clinic for twenty-five years and when it was sold, she went to Magic Valley Regional for five years when she retired (2006). Mary was very active in the Twin Falls Lioness Club, Cub Scouts and Boy Scouts. She followed Jim’s activities in school and sports religiously. Golf was her passion – very proud of a hole-in-one on ladies’ day. Upon retirement we had three or four driving trips all over the U.S. and three boat tours to Alaska & Mexico. Many golf courses were visited during these trips. She enjoyed golfing with Brayden, Jim, and Chris often. She got a kick out of fishing trips with Brayden. The last two plus years were medically rough for Mary – she put up one hell of a fight though. We had fifty-six plus wonderful years together.

She was preceded in death by her parents, sisters Faye Melsan, Sue Melsan, Vesta Earl La Rosa, May & Kay Taylor.

In lieu of flowers a donation can be made to St. Luke’s Health Foundation, P.O. Box AK, Twin Falls, ID 83301 or The American Heart Association.

A funeral service will be held at 11 a.m. Thursday, August 20, 2020 at White-Reynolds Funeral Chapel 2466 Addison Ave E. in Twin Falls; viewing will be one hour prior to the funeral, interment to follow at West End Cemetery in Buhl. Condolences may be left by visiting www.whitereynoldschapel.com
Read Less

To send flowers to the family or plant a tree in memory of Mary "Martie" Taylor Israel, please visit our Heartfelt Sympathies Store.

We encourage you to share your most beloved memories of Mary "Martie" Taylor Israel here, so that the family and other loved ones can always see it. You can upload cherished photographs, or share your favorite stories, and can even comment on those shared by others.

Posted Aug 22, 2020 at 11:06am
Just wanted to let all of you know I love you and miss you. Would have loved to come to the funeral to say good-bye but living 3000 miles away in Owen Sound, Ontario, Canada and with borders closed, etc. it was impossible. I am so glad I got to visit with her three summers ago when we were home for a family reunion. We were supposed to be there in June of this year and Martie and I had planned to get together but Covid closed the border so that didn't happen and I am so sad it didn't. I know you will all miss her. Chris, I know it is hard for you....you had a lot of years together. Just know I am sending big hugs! Love you all. Mary Lee

Posted Aug 17, 2020 at 11:56pm
Sad to see the passing of Mary. I remember her at the TF Clinic and Hospital. She was kind and caring while my Mom was in the hospital. She will be missed by all. Chris, our thoughts and prayers are with you at this time of sorrow. Lance Clow
Comment Share
Share via: 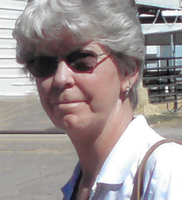