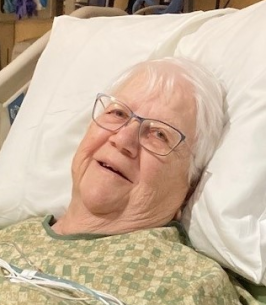 After high school she began working as a grocery store worker in Hazelton and met her husband
William Orville Wayment after he returned from the Marines. They were married Dec. 18, 1959,
and later sealed Dec. 17, 1977, in Idaho Falls LDS Temple. The family later moved to Twin Falls.
They were the parents of four children. The first, Melvin, was born in November 1961, and died
shortly after birth. Two more sons, Calvin Mark and Marvin, followed in 1964 and 1966. Their
daughter Laurie was born in 1970. Marilyn was a caring mother to all her kids, and their friends,
always supporting them in all their activities.

Marilyn worked for Twin Falls School District as a food worker from 1976 to 2001, allowing her
to be near her kids and their school schedule. Orville ran a machinist production company
which Marilyn helped manage. They enjoyed gardening, riding motorcycles, and camping
frequently at Alturas Lake, Stanley Lake, and the South Hills. Orville passed Jan. 15, 2018.
A wonderful baker and cook, Marilyn loved and was deeply loved by grandchildren, and many
beloved nieces and nephews. She had a nurturing presence, and a gift for listening to those who
needed a friend.

A devoted member of The Church of Jesus Christ of Latter-day Saints, Marilyn loved serving in
many roles, most special being a Primary teacher. She served in Primary presidencies, was a
Relief Society president, and gave loving counsel and care to her fellow sisters. She served in a
Young Women’s presidency alongside Laurie as co-secretaries in recent years.
Marilyn had a firm testimony of her Heavenly Father and Jesus Christ, and the special
opportunities and gifts given in her life.

She is survived by her children, Marvin (Merrilee) of Kimberly, Mark of Jerome, and Laurie of
Twin Falls; three children, nine grandchildren, two great-grandchildren, a lot of nieces and
nephews; one brother-in-law, Larry (Pat) of Twin Falls; a sister-in-law, Karen Hall, of Idaho Falls.
She is preceded in death by her husband, their son, and all her brothers and their wives and
sister-in-law Darlene.