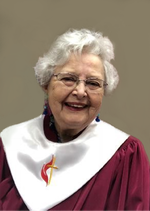 Lois was born on June 12, 1932 in Wendell, ID to Rudolph and Bertha (Preas) Fiegenbaum. Having married William C. Biser Jr. in 1951, she had two wonderful children, Jacqueline and Rodney.

Lois had a passion for singing in choirs and performing. She had acted for many shows for the Dilettantes and also was a part of the Oakland Symphony Chorus as well as the Contra Costa Chorale.

Lois was a strong, determined and fiercely independent woman. Being a very intelligent woman, she was the type who would challenge college course in leu of taking them. Lois had worked as a bookkeeper, accountant, office manager at St. Luke’s Hospital in San Francisco, and radio station manager at KTFI in Twin Falls, ID. At KTFI, she wrote promos, commercials, operated the switchboard and then wrote news stories. This was her favorite job, and even had one news story that went national.

Lois was preceded in death by her daughter, Jacqueline, and her son, Rodney. She is survived by her grandchildren, Deana Wheeler, Ryan Wahl, Shannon Hoye, Jeffrey Biser, Jacqueline Biser, nephew Tim Fiegenbaum, and 11 great-grandchildren.

The family expresses appreciation to the home caregivers and hospice staff, as well as the physicians that participated in her care.

A funeral service will be held on Friday, October 16, 2020 at 11 am, at White-Reynolds Funeral Chapel 2466 Addison Ave E. in Twin Falls, ID. A live stream of the funeral will be available at this link https://youtu.be/TgxhJZ50TKA. A Celebration of Life will be held at Elevation 486 in Twin Falls, ID following the service.