To share your memory on the wall of June Potthast, sign in using one of the following options:

Print
June Leona Potthast, 80 of Twin Falls, passed away on October 11, 2020 at her residence in Twin Falls.

There is so much more to our June than high heels, a flashy wardrobe, statement jewelry, and fabulous handbags!
Of a humble beg... Read More
June Leona Potthast, 80 of Twin Falls, passed away on October 11, 2020 at her residence in Twin Falls.

There is so much more to our June than high heels, a flashy wardrobe, statement jewelry, and fabulous handbags!
Of a humble beginning, June Leona Koch was born, November 25, 1939, in the tiny village of Eustis, NE. June joined her parents, Wayne and Leona (Puls) Koch and brother Bruce. Common during these times, her dad, (a farm and ranch hand) moved the family to follow work. They traveled between Nebraska, Idaho, and California throughout her childhood and early teens. She sometimes changed schools mid-year. With big brother Bruce at her side, family entertainment was often target shooting and fishing!
With the family's 1955 move to Twin Falls, the Magic Valley became June's permanent home. She graduated TFHS Class of 1957. In August of that year she married Lyle D. Potthast, a 1956 TFHS graduate, son of Edgar and Della Potthast. The following summer June and Lyle welcomed a baby son, Michael (Mike). Their daughter, Michele, joined the family the first day of Autumn 1960.

Family and extended-family were material to June and Lyle in the raising of their children. Summer vacations were camping trips with grandparents and beyond. June loved to entertain and to be entertained! Traditional holidays were of particular significance with each family getting their turn as host. Each and every birthday was celebrated with favorite desserts, endless coffee, and rousing games of pinochle. When it was June's turn to entertain, she was not to be outdone! This hostessing spirit continued throughout the years with her final party being this past Christmas with her dearest friends.
When June and her Idaho family traveled it was nearly always to visit family members in California, Oregon, or Nebraska. She especially enjoyed the company of her four aunts and uncles, (Wayne's sisters) and their families, her cousins. She loved cousin Barbara Gieg like a sister.

June's work career began circa 1964 to earn the extra money needed for her children to attend Immanuel Lutheran School. A gunsmith's daughter, fittingly her first job was hand-checkering woodstock at Herrett's Gun Stocks. A few years later when this pretty, petite, stylish young lady presented herself for an interview at Sears-Roebuck, she was hired on the spot to work in the men's department! She also ran the candy and sewing departments. Upon promotion to store sales manager, large appliances, she was personally presented an award at The Sears Tower (Chicago,Il) for the first woman in Sears history to hold that position!
June transitioned careers with the 1984 purchase of the Interstate Battery System of ID distributorship. Doing so, she became the first female distributor in the history of Interstate Battery System of America! This was not to be her last award or milestone. The most recent IBS of America recognition reads, "IBS of Idaho entered into an elite group of Distributors known as the 'Million Unit Club'." With her son, Mike, working alongside, she was very proud of this achievement. June always expressed a genuine interest in the lives and well-being of her employees throughout the years. June loved her IBS life! Fellow distributors became lifelong friends. June and her companion, Jerry, traveled to every IBS convention and meeting across America. She looked forward to the next convention just as one was ending.

Friends and business colleagues were essential to June. She cherished her TFHS Class of '57 friends. She especially adored her girlfriends and their monthly lunch dates! Because of the camaraderie June also loved being a member of Blue Lakes Country Club. Dressing up for a holiday party, a wine dinner, or dance at The Club was always a new outfit occasion for her!

In her ending, her humble beginning was most present. As her daughter, I am honored to write these words from her and about her to you.

June has joined her parents, Wayne and Leona, as well as their respective siblings. She is survived by her son Michael Potthast (Mimi Ford), daughter Michele Meehl (John), brother Bruce Koch, nephews Robert Koch, Ronald Koch, Andrew Koch, Randall Koch, and her dearest cousins and their children.
A traditional Lutheran Funeral Service will be held at White-Reynolds Funeral Chapel, Friday, October 23, 2020, 11:00 am. June will be inured with her parents at Sunset Memorial Park immediately following the service. The family is hosting a celebration of June's life that afternoon from 1:30 - 3:30 at The Rock Creek. You may leave your condolences at whitereynoldschapel.com.

To send flowers to the family or plant a tree in memory of June Potthast, please visit our Heartfelt Sympathies Store.

Receive notifications about information and event scheduling for June

We encourage you to share your most beloved memories of June here, so that the family and other loved ones can always see it. You can upload cherished photographs, or share your favorite stories, and can even comment on those shared by others.

Lynette McFarland sent flowers to the family of June Potthast.
Show you care by sending flowers

Posted Oct 20, 2020 at 01:48pm
I was so saddened to hear of June’s passing. I have known June for many, many years and always enjoyed her vibrant style, wit and business mind.
Comment Share
Share via: 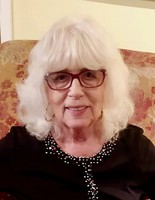