To share your memory on the wall of James Gibson, sign in using one of the following options:

Jim Gibson of Twin Falls passed away peacefully on Sunday, October 4th, 2020. Jim was born in Cleveland, Ohio, the son of James and Sidwell Gibson. He spent his early years in Chag... Read More
James Kermit Gibson
May 22, 1934-October 4. 2020

Jim Gibson of Twin Falls passed away peacefully on Sunday, October 4th, 2020. Jim was born in Cleveland, Ohio, the son of James and Sidwell Gibson. He spent his early years in Chagrin Falls, Ohio. He moved to Visalia, California for college where he met Pat Kuykendall. They were married Jan 9, 1955 in Three Rivers CA. Jim and Pat moved to Pacific Grove, CA, where Jim served 2 years in the army at Fort Ord. Following this, Jim graduated from Fresno State University and became a teacher of Art.

While in Pacific Grove, Jim, developed his art as he painted real life scenes of fishermen and all the life that is typical of the wharf and ocean environment where he lived. As the public became more aware of Jim’s paintings, he began selling them and also won awards as he displayed his work in art shows. Jim often had an art studio in his home, and felt it was important to teach his children about creativity. His last venture into art was making fish out of clay and mounting them on rustic wood, a fishing line, or creel.

Besides art, Jim loved fishing, gardening, and sports, especially football and track in high school and college. He was always there to support his 7 children in what ever sport they were in and often was their coach as well.
Jim was taught at a young age to work hard. He did that all his life and he taught his children to work hard. Because of this, they are all very successful in their lives. He also treated them to the fun things in life: vacations at the ocean, lake and Disneyland; movies; fun family home evenings; as well as holiday activities such as carving pumpkins at Halloween and dying eggs at Easter.

He always worked hard and had a large family to support. Along with his passion in art, he worked in several other businesses. He spent time in the sign painting business and he worked for the Bell Telephone Yellow Pages as a salesman for years. He came to Twin Falls, Idaho, to manage a fertilizer business, and after a few years he eventually bought his own Hearing Aid business after training for that license.

Jim always said that Heavenly Father led him to Twin Falls, a place he and his family came to love, and made many treasured friends. Jim is an active member of the Church of Jesus Christ of Latter Day Saints, where he served in many callings which he loved, including a service mission with his wife for a year. Together, they also served for four years in the Twin Falls Temple. He always enjoyed his church service and helping others along the way. One of his favorite callings was as a home teacher. Jim was a wonderful husband, father, grandfather, brother, son, and friend.

A funeral service for the family was held in October, 2020.
Read Less

To send flowers to the family or plant a tree in memory of James Kermit Gibson, please visit our Heartfelt Sympathies Store.

Receive notifications about information and event scheduling for James

We encourage you to share your most beloved memories of James here, so that the family and other loved ones can always see it. You can upload cherished photographs, or share your favorite stories, and can even comment on those shared by others. 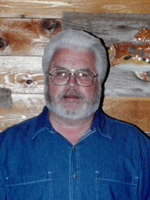