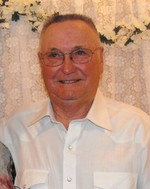 Donovan (Don) Claude Campbell passed away peacefully surrounded by family and friends at Syringa Care Center on September 24, 2020. Don was born in Gooding Idaho to Claude and Esther Campbell on January 5, 1928 and lived a life full of adventures.
Donovan graduated from Gooding High School in 1946 and joined the Navy to serve his country as a Seabee. When Donovan returned from his service with the Navy, he met his beautiful bride Shirley Williams, and they were married July 14, 1950 in Gooding Idaho. Donovan and Shirley were married for 70 wonderful years! Don and Shirley moved to Chicago, Illinois in 1952 where Don attended Coyne Electrical School. When Don completed his Electrical school, they moved back to Twin Falls. After their return they moved to the Lewiston area for a short time to farm cattle before returning to the Magic Valley area. Donovan worked for Waite Electric for 16 years along with Silver and Cook Electric prior to starting Campbell Electric in 1976 with his sons Bob and Roy. When Don and Shirley retired, they traveled the United Stated for several years before splitting their time between Twin Falls in the spring/summer months and Yuma, Arizona in the Fall/Winter months.
Donovan was preceded in death by his four sisters: Beulah Schwartzkopf, Marion Libbreicht, Alma Conant and Jackie Robinson and one grandson, John Chance Campbell.
Donovan is survived by his wife Shirley, four sons: Bob (Mary), Roy (Peg), Eugene, and Rodney. Four grandchildren and 13 great-grandchildren. Graveside services will be held Wednesday 11am at Twin Falls Cemetery. Condolences may be left at whitereynoldschapel.com