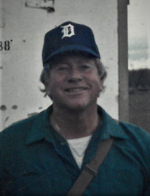 Donald Michael Edison (7/18/30-11/6/20)
Don Edison aka The Sagebrush King, a friend to all who knew him, passed away surrounded by his adopted family on November 6, 2020. Don spent his 90 years on Earth living the kind life that most people only dream of. Born in Detroit, Michigan, he came from humble roots. His father, Michael Edison, was an immigrant from an area that is now part of Croatia. His mother, Julia Balathy was born in Pennsylvania. Like many others, they moved to Michigan due to the availability of jobs offered by the Ford Motor Company.
Don grew up in the Detroit area. His father owned a barber shop across from Olympia stadium where the Redwings played. He had the great fortune of meeting famed players such as Gordie Howe, kindling a lifelong love of sports. Don graduated from Cooley High School where he was a gifted athlete. He played football, baseball, hockey and ran track. He was drafted into the Army during the tail end of the Korean War. He was discharged when the war ended without serving overseas. Following his time in the service, Don enrolled in Wayne State University where he played tailback, graduating with a degree in education. Later, he headed West, spending much oh his time in Lake Tahoe and Sun Valley.
During his time in Sun Valley, he developed a love for the state of Idaho and all that it has to offer. He enjoyed hunting and fishing on silver Creek and exploring the wilderness that surrounded Ketchum. He spent many years in Sun Valley working on the trail crew that was responsible for creating the ski runs on Baldy that have been enjoyed by generations of skiers. He also worked as a model for Eastman Kodak.
While living in the Reno-Tahoe area, Don worked in construction as well as security at the Cal Neva casino during the heydays of the 1950s when it was a playground for the rich and famous. A gifted raconteur, Don had many stories that he loved to share about rubbing elbows (and other things) with numerous starlets of that era. He worked as a bodyguard for members of the rat pack like Frank Sinatra and Sammy Davis Jr. He also shared stories about partying with Michael Landon and other members of the Bonanza cast and crew. He also had many stories of meeting associates from crime families that frequented the casinos at the time.
In his later years, Don spend many years is a realtor and real estate developer in the Tahoe area. He was rightfully proud of his time working with the Lions Club, restoring sight and other benevolent acts for those in need. He often spoke of the horses he kept when living in the Tahoe keys. They were his way to escape the tension and stress of work when he couldn’t get away to hunt. He loved teaching people to ride almost as much as sharing his love of the outdoors and hunting.
Don is survived by his sister, Marie Horn, nephews James Horn and Steve Horn, cousins Mary Balathy and Al Balathy. He was preceded in death by his parents and his niece Julie Horn. He was never one to pass up the chance to hear/tell an off-color joke or share something that he learned. Dons kindness and generosity earned him friends everywhere he went. His gregarious nature was a natural attraction for everyone he met. He was dearly loved. He will be greatly missed.