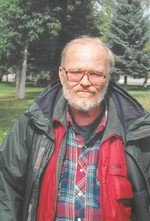 Arvie was born in Kulm, North Dakota, son of George and Lydia Nelson, on February 8, 1947.

His family moved to Buhl, Idaho in 1948, Arvie, grew up in Buhl and graduated from Buhl High School in 1965. He joined the Army in May of 1965 where he served in Vietnam as a medic.

He lived at the Countryside Living Center in Mackay, Idaho and at the Antelope Creek Living Center in Darlington, Idaho for many years, before moving to Oak Creek Care Center in Kimberly in 2019. Arvie did not know a stranger and made friends everywhere he lived. He was a generous and caring person, loved by family, friends and caregivers.

Arvie is survived by his twin sister Joyce Blackburn of Fairfield, California, a sister-in-law Marlene Nelson and brothers Mike (Debbie) Nelson and Earl (Susie) Nelson, all of Twin Falls, Idaho. Also, many cousins, nieces, and nephew.

He was preceded in death by his parents, brother Ralph Nelson, and sisters Lucille Bernard and Jane Nelson.

A graveside service will be held at 11:00 a.m., Friday, September 11, 2020 at West End Cemetery in Buhl, Idaho. To leave a condolence visit www.whitereynoldschapel.com.